Would you like to switch to the accessible version of this site?

Don't need the accessible version of this site?

When Should My Child Get a Tetanus Shot? 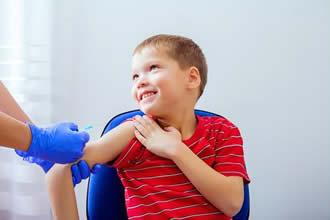 All children need to get a tetanus shot. When we think of tetanus we often think of rusty nails; however, this bacterium isn’t just found on rusty metal items, it also lives in soil and dirt. If bacteria come in contact with a wound or opening in the skin this can lead to a serious infection. If your child, like many, enjoys running around outside barefoot, they must be keeping up with their tetanus shots.

When should my child get their first tetanus shot?

While tetanus can cause some serious symptoms including “lockjaw," it is completely preventable with a vaccination. The DTaP vaccine is used to prevent tetanus (along with diphtheria and pertussis) and your child will get their first series of shots at 2, 4, and 6 months. Your child will also need another tetanus shot between the ages of 15 to 18 months old and between 4-6 years old.

Children should continue to get a tetanus shot during their annual pediatric checkup until they turn 18 years old. Instead of getting the DTap vaccine, which they got as a young child, they will get the Tdap booster shot that still protects against diphtheria, tetanus, and pertussis.

Once your child reaches adulthood, they will get a Td vaccination, which will protect them against tetanus and diphtheria.

What are the signs and symptoms of tetanus?

Most children will develop symptoms within two weeks of exposure to the bacteria. Symptoms of tetanus include,

If left untreated, tetanus can be life-threatening so it’s important to bring your child in right away if they develop any of these symptoms.

If it’s time for your child’s next tetanus shot, your pediatrician will be able to administer the vaccine either during their next routine checkup or at a separate important. You must be keeping up with your child’s vaccine schedule so that they are fully protected against potentially dangerous communicable diseases.

Find us on the map